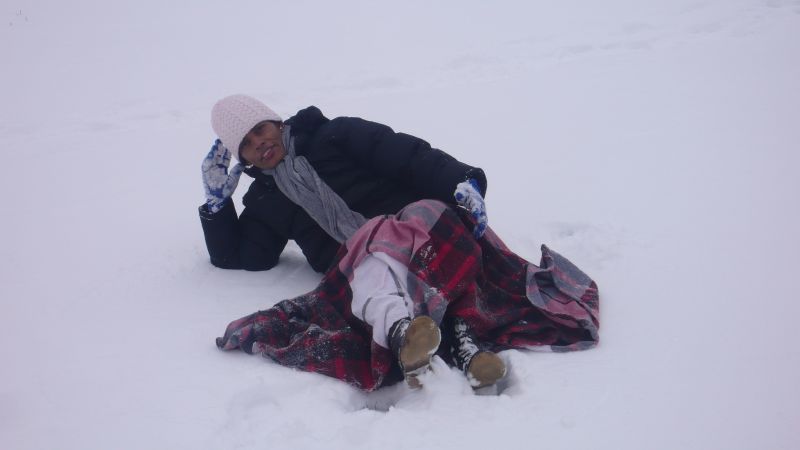 The documentary depicts the story of an encounter between two women from distant cultures and parts of the world. One, from Poland, the other, from India – they met by chance and shared their accommodation for a year. Can this situation bring them more benefits or more hazards? Is it worth it to take responsibility for someone else’s fate, thereby risking limiting one’s own freedom?

In January 2012, the Polish artist Marta Deskur was on a residence in the experimental, utopian city Auroville, founded in southern India in 1968. Its founder, the French woman Mirra Alffasa, intended the city to become a paradise on earth, a place with no social divisions, a place where men and women of all races, nationalities and faiths would live side by side and develop in harmony with one another and with the world. One day, in the library, Manju, a woman who lived in Auroville, came up to Marta and invited her for a meal. The following day, Manju asked Marta a direct question: could she help her leave India? Manju Pavadai was born in 1979 in Tamil Nadu in India, in a village subsequently subsumed by Auroville. She married a Hindu who had been adopted by an American couple, members of the Aurovillian community, moved out of her family home and went to live with him. A few years later, their relationship fell apart – Manju, a country girl, was not compatible with a boy who had soaked up American influences. For Manju, the end of that relationship entailed unpleasant consequences – she became alienated; she had not been accepted as part of Auroville, while as a divorced woman, she sank to the bottom of the Indian social pecking order (for various reasons, it is almost impossible for her ever to re-marry).
Some time earlier, Marta, an established artist, had found herself with an opportunity to study in France. In the 1980s, in communist Poland, she had by chance met a man who, quite altruistically, helped her to leave Poland. Marta had graduated from an art college in Aix-En-Provence, and stayed on in France for another ten years. The casual meeting had changed the course of her life.
When Manju asked Marta to help her leave India, she didn’t hesitate long before replying in the affirmative. During 2012, Manju’s passport, Polish visa and all other travelling formalities were sorted out. The Museum of Contemporary Art in Krakow provided support. For one year, Manju has been staying in Poland. Her dream to leave India has come true. But, what next? Can her arrival in Poland improve Manju’s life? Like the majority of Indian citizens, Manju’s perception of Europeans had been as affluent individuals from a somewhat nebulous, but decidedly superior, reality. Has Manju retained her cultural customs, or rather she has acquired new, European ones? These questions form the framework of the film, which is a record of the transformations that take place in Manju’s life. Manju got her jobs, she met new people. At first at a loss, she found her feet in the new situation. When asked whether she would like to stay on in Poland, she answered yes; to her, the greatest difference between India and Poland was the freedom experienced by women.

The structure of the film Manju Goes to Poland consists of a number of intertwined formal themes:
-The biographical part is presented in documentary style. It consists of Manju’s statements, observations of her life and her natural habitat in India and during her one year trip to Poland.
-Replicated iconic scenes of classical films. These scenes work into the tale of Manju’s life in Poland and at the same time they reflect the emotional state of the protagonist. They include the scene from Ingmar Bergman’s Persona, Tamil film Aval Appadithan from 1978 by Rudraiah Chockalingam and Dressed to Kill by Brian De Palma from 1980.
-The dancing sequences. They introduce a dynamic element into the narrative and enable the viewer to appreciate the aesthetic background of the protagonist. These sequences are inspired by Tamil and Bollywood cinema, which are typically constructed around a single theme, which boils down to a short storyline but related as a lengthy narrative. They are emotive, fairy-tale like and – for Europeans – often come over as over-elaborate or kitsch. The dancing will be performed by Polish dancers against the background of Polish landscapes, and the text of the songs will complement Manju’s own story.